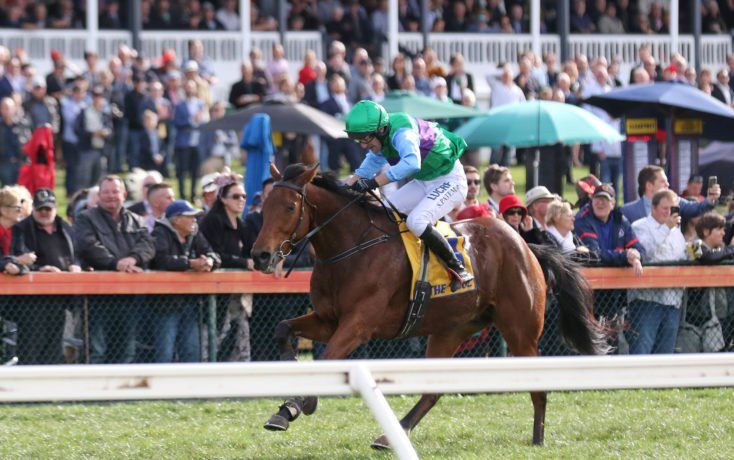 Zed Em has given trainer Patrick Payne a fourth victory in Australia’s toughest race, the Grand Annual Steeplechase at Warrnambool.

The win turned around his narrow defeat 12 months earlier when Zed Em was beaten by Gold Medals who fought bravely on Thursday to finish second, three lengths astern of the Steven Pateman-ridden gelding who lumped 70kg over the 5500m.

Payne first won the Grand Annual in 2012 with Awakening Dream before scoring with Chapparo (2014) and No Song No Supper (2016).

“I thought Gold Medals might get us at the top of the straight,” Payne said.

“Someone said to me you’re home, but I wasn’t as confident.

“I thought that was the kiss of death.”

A former champion jockey, Payne says he gets more satisfaction from training, especially jumpers that require time and patience.

“You get pretty close to these horses and it’s heart wrenching stuff watching them go around.

“One of the new staff members asked one day what’s the matter with Paddy and a senior staff member said the Annual’s coming up, you’re better off keeping out of his way.”

Zed Em did his early preparation work in New Zealand with Kevin Myers, arriving in Australia in March to win the Von Doussa Steeplechase and Great Eastern Steeplechase double at Oakbank.

Thursday’s victory was Zed Em’s 13th over jumps from 20 starts but Payne is reluctant to say he is the best jumper he has trained.

“I think Sea King is better but this horse is just so sweet at a fence,” Payne said.

Despite having Zed Em on the speed and leading over the final fence, Pateman was not confident of success until he crossed the line.

“Last year we got swamped in the last 100 metres and I was done,” Pateman said.