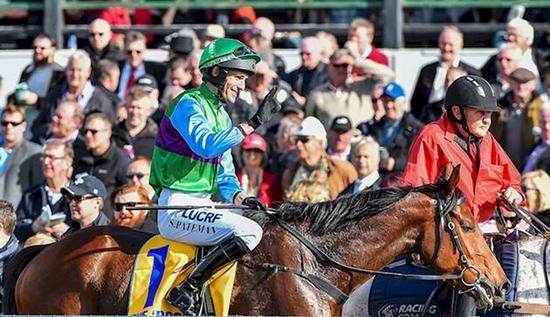 Chocolate Royal is no longer than the only horse to have won the Von Doussa Steeplechase three years in a row, following yet another dashing display by Zed Em on Sunday.

The Patrick Payne-trained gelding completed a hat-trick of wins in the 3250-metre event when he affirmed his love affair for the Oakbank circuit in the $100,000 contest.

Expertly handled by Steven Pateman, Zed Em made the most of the set weights and penalties conditions of the race to exert his class over his rivals.

Sent out the $1.75 favourite, he scored by just under five lengths from Spying On You ($15) with Doc Holliday ($4.80) almost seven lengths away third.

The victory completed the jumps double for Payne and Pateman, who earlier won the $45,000 Thomas Farms Hurdle (3200m) with Killarney Kid.

The nine-year-old further pressed his claims for recognition as one of the most promising hurdlers in the country with a soft four length win over Murphy’s Delight.