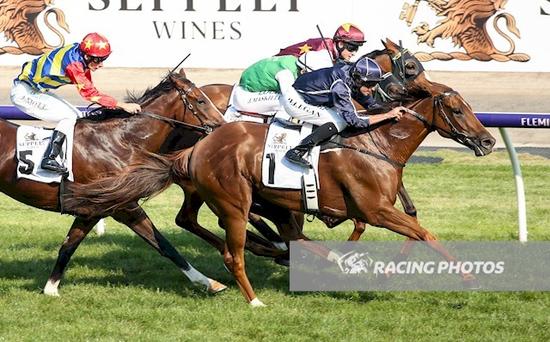 Widgee Turf did not make the field for The All-Star Mile but he was still something of a crowd favourite at Flemington on Saturday when he was loudly cheered home in the Listed March Stakes.

Widgee Turf may have failed to attract the public vote to get him into the day’s $5 million feature but punters relied heavily on him as he started the $4 favourite before he lunged late to beat Hellova Street ($4.80) to record his 10th career victory.

Partnering him in nine of those wins has been Billy Egan, who was fearful turning for home that the horse might not finish off as well as usual.

“I was handy and they rolled along and I know that he likes to have a resting run to have a finishing burst and I thought I am going to get past them, but he’s only got so much petrol there,” Egan said.

“But he really hit the line well.”

Widgee Turf might not quite be a Group 1 horse but he’s a champion as far as Egan is concerned.

“You can never bag him,” he added. “He always runs an honest race and I am certainly rapt to be a part of him.”