Tortoni has Cherry on top after Vase victory, with Derby next 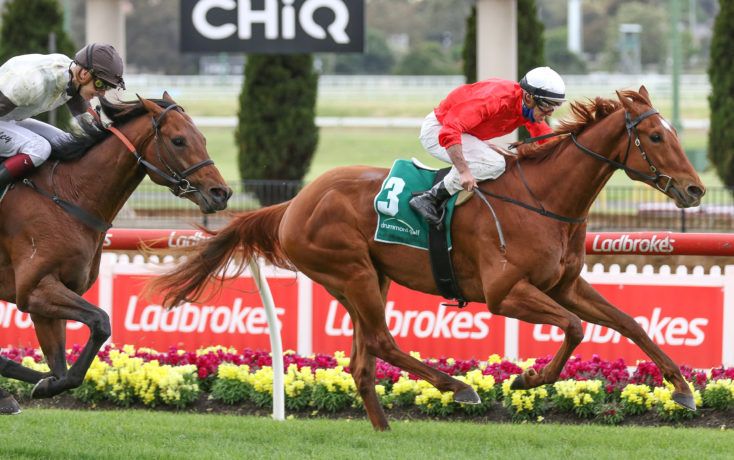 The jokers around Victoria’s racetracks always like to say that whenever Billy Egan goes out to ride with his sleeves rolled up he means business.

The pushed-up sleeves has become something of a signature for a jockey who has forged such a successful partnership with leading trainer Patrick Payne, who won a Cox Plate and numerous other group 1 races during his riding career.

Egan certainly had his sleeves rolled up in a fashion that Payne would have approved of at the Valley as he landed the group 2 Drummond Gold Vase, a traditional lead-up to next weekend’s Victoria Derby, on the trainer’s improving young stayer Cherry Tortoni.

The Vase has proved a very useful guide to the 2500-metre Derby on the opening day of Flemington’s Melbourne Cup carnival.

Efficient in 2006 might be the last horse to have completed the Vase-Derby double, but Jameka won the Vase en route to an Oaks triumph in 2015 and several other winners have run prominently at Flemington seven days later.

Cherry Tortoni’s task was made easier by the scratching of pre-race favourite Young Werther, the latter’s trainer Danny O’Brien feeling that the heavy rain overnight Friday and on Saturday morning had made the track too soft for his lightly raced Derby contender.

But Cherry Tortoni could only beat those who did turn up, and he did so with a measure of authority, if only by a narrow margin, from second-placed Khoekhoe.

The winner and the Fred Kersley-ridden runner-up, from the Matt Cumani stable, cleared right away from their rivals with Johnny Get Angry, trained by former North Melbourne premiership-winning coach Dennis Pagan, seven lengths behind in third place.

Bookmakers left Young Werther at the head of the Derby market although the TAB pushed O’Brien’s horse out from $4 to $4.60 while trimming Cherry Tortoni in to $6 from his previous quote of $13.

Cherry Tortoni was the first winner of the day to come from off the pace when leaders were to the fore.

The jockey, wearing the famous red with white cap colours which used to be carried by that grand old stayer and multiple group 1 winner Tie The Knot, circled the field and took the lead some 400m from home as pacesetter Captain Corelli gave way.

Only Khoekhoe came out of the pack in pursuit and although the runner up was closing all the way up the straight, the winner was in control.

Cherry Tortoni had disappointed last time out in Sydney, and Payne blamed himself for that effort.

“I was dirty on myself after the Sydney run but today was much better,” Payne said.

“From a trainer’s point-of-view I didn’t think he had a hard run. We’ll never know but I still think he had something left in the tank.

“We’re really mindful that, I think, he’ll be a nice four, five and six-year-old. It was a good tune-up for the Derby but if he shows us any signs that he doesn’t want to go there then we won’t.”

As published by Michael Lynch – The Age
https://www.theage.com.au/sport/racing/tortoni-has-cherry-on-top-after-vase-victory-with-derby-next-20201024-p56878.html