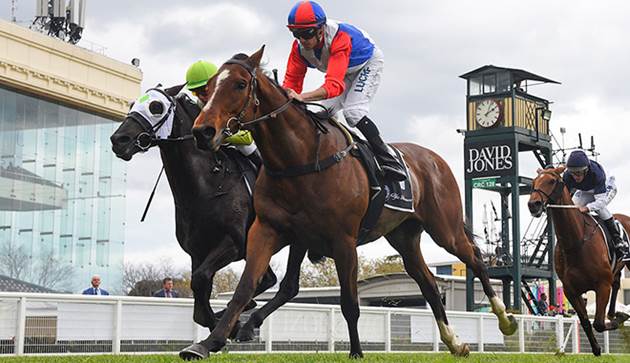 Owner John Morton broke a 38-year drought when a horse picked out by his late wife charged home to win the Alfa Romeo Plate at Caulfield on Wednesday.

“He was riding with an angel on his shoulder,” Morton said of jockey Billy Egan after the victory of the Patrick Payne-trained Double You Tee over 2000 meters.

“My wife picked him out at the Tassie sales and of course we couldn’t afford $125,000 so we bought five percent.

“She passed away 12 months ago. I think of her all the time, but it was just wonderful today.”

Morton’s last city win was a famous one as he was a part-owner of Full On Aces, who won the 1981 Golden Slipper Stakes.

“We’ve been in many horses over the years and the first horse we had won a Golden Slipper and that was Full On Aces way back in the early 80s and we haven’t had a city winner since,” Morton added.

“He was riding with an angel on his shoulder.”

John Morton’s wife picked out Double You Tee at the Tasmanian Sales before passing away 12 months ago. pic.twitter.com/OMUm6VtIY8