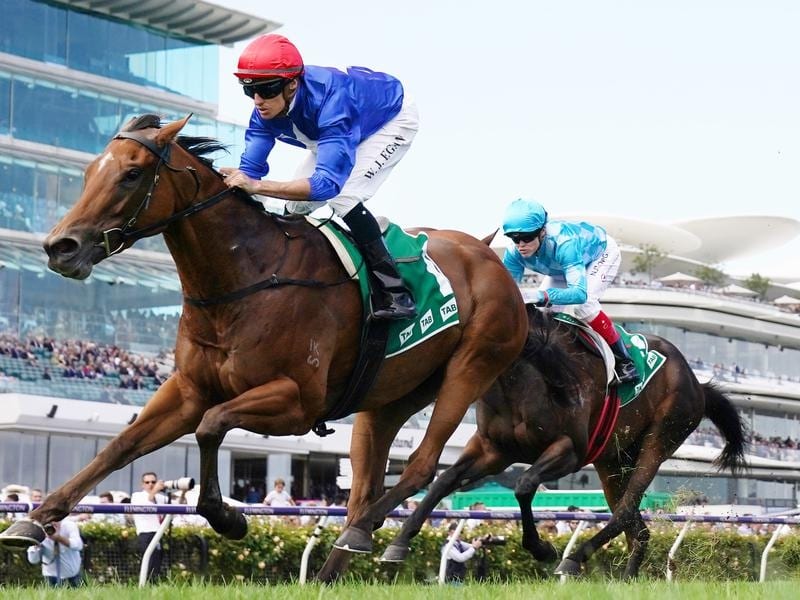 The $7.5 million Golden Eagle shapes as a potential longer range target for exciting filly Rubisaki who has continued her rise with an impressive win in the Group Two Kewney Stakes at Flemington.

Trained by Patrick Payne and ridden by Billy Egan, Rubisaki ($3 fav) gave most of her rivals a start and then a beating as she powered home to claim her first stakes victory in Saturday’s 1400m race for three-year-old fillies.

Sandown Guineas winner Pretty Brazen was 1-1/4-lengths away second with another Group Two winner Fascino hitting the line out wide for third, another half-length away.

Rubisaki has won six of her eight starts with four-successive victories which has included the $1 million Inglis 3YO Sprint at Warwick Farm last month.

Part-owner and syndicator Joe O’Neill is convinced the best is to come from Rubisaki and said longer term, the $7.5 million Golden Eagle (1500m) in Sydney this spring for four-year-olds would have to be on the radar.

“She’s been to Sydney and won a $1 million race so she goes well on that leg.

“I think there’s a lot more to come from her.

“I’m not sure exactly how good she is. We’ve looked after her and Patrick has done a marvellous job.

“There was some pressure to go to Sydney last week (for the Group One Surround Stakes) but we thought we’d wait here for this race and then we’ll see where we go from here.

“She’s a high class horse. Who knows what her limit is? She’s won six out of eight and could have been eight from eight with any luck.”

O’Neill said the Group Three PJ Bell Stakes (1200m) at Randwick could be next for Rubisaki and Egan is also excited about the filly’s future.

“She’s blessed with a fair bit of ability but she’s got a lot of heart as well,” Egan said.

“Hopefully if she keeps improving the way she is, it is exciting what’s to come with her.”