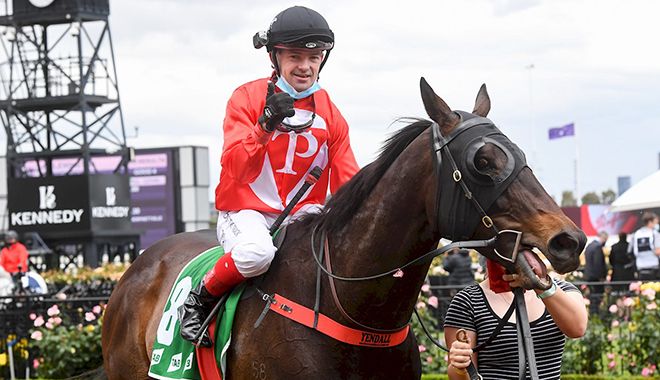 The rags-to-riches tale of Justacanta might not yet be finished for the spring with the former Kiwi possibly aiming up at Saturday’s $500,000 Cranbourne Cup (1600m).

Such a Stakes victory would double the eight-year-old’s already sizeable spring return of some $330,000 and while there have been much bigger winners this spring, few have come with such humble expectations.

Verry Elleegant was the banner horse for New Zealand-breds over the Spring Carnival, but Justacanta may be the value horse.

He was initially purchased as a yearling in 2015 for just $11,000 and then again in 2019 via online auctioneers Gavelhouse for about half of that.

After 48 starts in New Zealand, trainer Patrick Payne gained the horse mid-year and was happily planning at aiming at some of racing’s lower fruits.

“Somewhere along the way they bought him for $6000 online and he was a 64-rater or something at the time and he made his way through his grades but when he came over here I thought he might have reached his mark a little bit,” Payne said.

“I thought if we could win a Mildura Cup or a race like that (it would be good), but he exceeded all expectations.

“He wants to be a good racehorse. He’s just a marvel to train. He’s really healthy and well and he goes out there and tries every time.”

As Justacanta only ran last week, when a fast-finishing third in the Chatham Stakes at Flemington, Payne is wary about going to the well again, but on Wednesday he accepted for the horse to race for the big prize on Saturday.

“I don’t want to keep running him but he keeps thriving and he’s got a pretty good life here at the farm and he’s got a very good wet-track record,” Payne said.

“He’s fit and he’s well and he likes wet ground.”