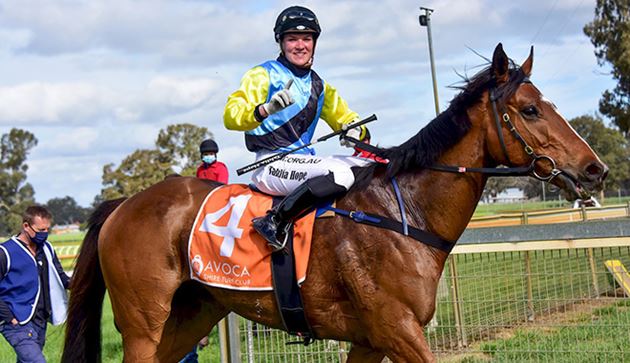 Apprentice jockey Tahlia Hope has the chance to win two country cups in a week, as she aims to add Sunday’s St Arnaud Cup to her Avoca Cup win last weekend.

Hope won the Avoca Cup on the Patrick Payne-trained Portland Jimmy and takes the ride on him again on Sunday.

“He’s tough and he’s fit,” Hope said of the seven-year-old gelding. “He raced last Saturday in the Avoca Cup and, to the horse’s credit, not everything went his way but he was very tough. In saying that, the St Arnaud Cup does look a little bit harder than last week.”

Hope said winning two country cups in a row would be ‘amazing’.

“To win two country cups in two weeks, it’s definitely a goal. It’d be a massive achievement to me. I actually won the St Arnaud Cup on Blue Jangles a couple of years back, so I did say to my manager that I’d love to win it again, especially on Portland Jimmy for my master Patrick Payne,” she said.

The wins are even more special for Hope right now, after she spent nine months on the sidelines recovering from viral meningitis.

The 22-year-old fell ill while riding at the Mornington jumpouts in July 2019 and within 24 hours had been diagnosed with viral meningitis, an infection that results in swelling on the brain.

“I took my time coming back,” Hope said. “I actually made the decision to not come back to race riding, but I did think I’d have something to do with racing. I had worked for Patrick [Payne] for a while and I did some work as a travelling foreman, taking a couple of horses away.

“He started putting me in trials but I’d got quite heavy and I just didn’t think I could lose the weight and I didn’t really have the motivation. I didn’t know what I wanted to do.

“But then the weight started dropping and he put me on the horse Zed Em for my first ride back, which is a jumper, and I thought ‘Oh yeah, I’ll just follow them round’, but he actually won. So it sort of kicked me along.

“A lot of credit does have to go to Patrick. He put a lot of hard work into me and tried to get me motivated and really kicked me along with my career. And obviously my family behind me, I couldn’t have done it without their support.

“You could say I was on cloud nine after the Avoca Cup, it was great. Even going to work on Monday morning. It was just a great moment. Everyone was so happy. Every win I’m getting at the moment is massive to me.”