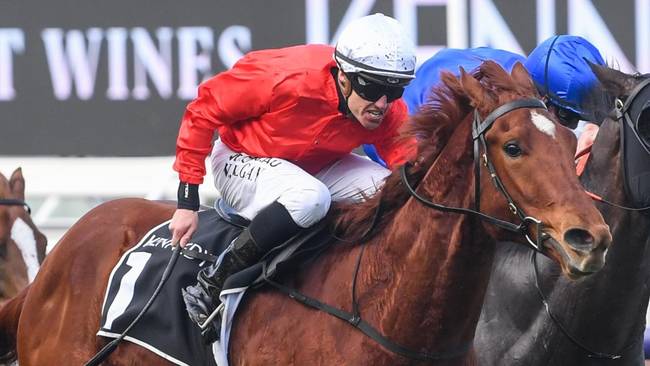 When Group 1 winner Whisked died giving birth to a Strategic filly in 2009, it marked the sad end of a marvelous era for owners Sandy Tait and his sister Jill Nivison.

Whisked was the mother of the pair’s former superstar Tie The Knot so it was with heavy hearts they hastily arranged for a neighbouring Hunter Valley nurse mare to come to try and save the surviving foal that September morning.

That particular era may have been over but the great thing about notable thoroughbred dynasties is they have a habit of resurfacing.

And so it could well be for Whisked’s 11th and final named foal, Tortoni, who survived her mother’s death and ultimately prospered under foster care.

She failed to make her mark in just four runs on the racetrack but in 2020, her impact on Australian racing is only just beginning to be felt.

She is the dam of the highly promising juvenile Cherry Tortoni, who on Saturday carries Tie The Knot’s famous red and white colours as he attempts to make it three wins from as many runs and put himself up as a genuine spring contender when he tackles the Kennedy Taj Rossi Series Final (1600m) at Flemington.

There is another link to Tait’s former champion in the form of Cherry Tortoni’s trainer Patrick Payne. He was coming to the end of his superb flat career as a jockey when he teamed up with 13-time G1 winner Tie The Knot for three elite-level victories in 2001 and 2002, including his last two Chipping Nortons.

For Tait, the fact that Payne is part of the Cherry Tortoni story makes it all that more special not only because of the strong bond the pair shared back in Tie The Knot’s heyday, but because Tait strongly values the relationship between trainer and owner.

“It’s a wonderful connection for my sister Jill and myself and to have Paddy train him is also fantastic,” Tait said from NSW this week. “He won three Group 1s on Tie The Knot and he also won two on Spinning Hill for us too.

“He was such a great jockey. He was absolutely a gun jockey and I see him as a gun trainer as well. A wonderful horseman and a lovely man.

“With Tie The Knot, we had the services of (the late) Guy Walter, who was a terrific man and a genius as a trainer and it’s not hard seeing some of those traits in Paddy.”

Tait said Tortoni had potential as a racehorse.

“She had one win at Wagga in four starts. She had a fair bit of ability I think but she had a few problems. But that ability is being passed on,” he said.

As for Cherry Tortoni, Tait said he was not yet certain as to what his best distance will be as the horse rises to 1600 metres on Saturday after his debut win at Sale (1200m) and his subsequent Flemington romp over 1400m.

“We just have to be careful where we place him,” Tait said.

“We have to decide whether he’s a stayer or a middle-distance horse. Tie The Knot’s best distance was a mile-and-a-quarter (2000m) although he won BMWs (2400m) and Sydney Cups (3200m) but he did those on pure class.”

Tie The Knot died in 2012 as an 18-year-old following complications with colic.

Tait has reason to dream on beyond Cherry Tortoni as he has a weanling filly by four-time Irish G1 winner Churchill and Tortoni is also in foal to Scat Daddy stallion Mendelssohn.

Cherry Tortoni maintains his unbeaten record. What a performance from the Patrick Payne galloper and a super ride from Billy Egan. 🍒 pic.twitter.com/vmCLmXkmfk

Cherry Tortoni gets the job done in the Kennedy Taj Rossi Series Final at @FlemingtonVRC for trainer Patrick Payne.

This gives jockey @TheBeeegan his 100th winner in Victoria this season, the first time in his career to achieve this.