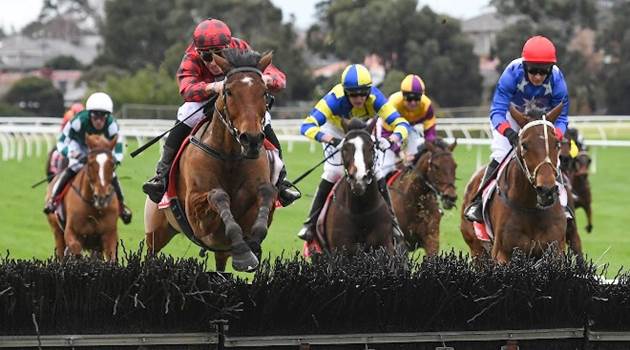 A hectic 24 hours paid off for the Patrick Payne stable when Kiwi jumper Tallyho Twinkletoe powered away to win Sunday’s $250,000 Grand National Hurdle (4200m) at Sandown.

New Zealand trainer Kevin Myers sent Tallyho Twinkletoe across the Tasman to Melbourne on Wednesday night but Payne had some work to do when the horse arrived at his stable.

Payne still had to get Tallyho Twinkletoe qualified to race over Victorian jumps, which took place on Thursday, but the nine-year-old jumped perfectly throughout the Grand National Hurdle.

“He arrived at 11pm Wednesday and jumped at 7 o’clock the next morning – on Thursday we had to qualify him – so all thanks to the Dummy Myers team in New Zealand,” Payne told Racing.com.

New Zealand jockey Aaron Kuru gave Tallyho Twinkletoe every chance to relax in the early and middle stages before letting the gelding creep into the race down the back straight the second time.

Tallyho Twinkletoe ($3 fav) hit the lead with 600m to run before asserting his advantage late drawing away to score by 4 ¾ lengths over Firefree ($20) and Euroman ($6.50).

Kuru only picked up the ride on Tallyho Twinkletoe after Matthew Gillies missed the booking after an incident in New Zealand on Saturday but relished the chance to compete against the best jumps jockeys in Australia.

“That’s always the goal for Kiwi riders, to a get a bit of a go in Australia,” Kuru said.

“We can compete, we just need the horses and it was satisfying riding a Kiwi horse, myself being a Kiwi.”

Payne said tackling the bigger jumps in the the Grand National Steeplechase would suit Tallyho Twinkletoe better than the hurdles.

Another Kiwi, the Brendan Dreschler Hurdle winner Gobstopper ($4.80) was pulled up in the back straight the second time around after jockey Emily Farr heard the horse make an unusual noise.